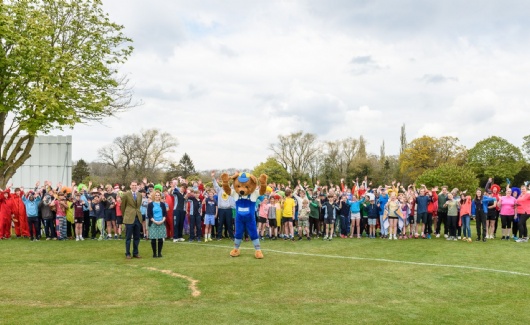 On 30th April 2021, staff and pupils took part in the annual Witham Hall Fun Run. This year’s event was held in support of Don’t Lose Hope, the Bourne-based mental health charity. Don’t Lose Hope’s Eddy Bear was there to start the race, cheering pupils to the finish line. Each child was asked to seek sponsorship for the event from family and friends, efforts which have raised more than £6,000 for the local charity. Everyone embraced the spirit of the event, running in fancy dress and house colours.

Don’t Lose Hope and Eddy Bear are not new to the Witham Hall community. Eddy Bear arrived to huge smiles and excitement in March for his surprise appearance at an outdoor assembly when children returned to school following the most recent lockdown. Dom and Nicola Brister from Don’t Lose Hope explained how the Fun Run would support Don’t Lose Hope’s professional counselling service for all members of the community from age four upwards regardless of their financial means. Witham Hall Pre-Prep also keep Don’t Lose Hope ‘Worry Monsters’ in every classroom encouraging the younger children to share their concerns and worries. The concept is that they jot down their ‘worry’ or whisper it in the Worry Monster’s ear, and the worry monster ‘eats’ it. Each worry monster has a name and is a reminder to speak up when you need help or are worried.

Mr Austen said, ‘We are working to normalise conversations about mental health with the children, wearing away any stigma. Of course, there is value in the children learning to play a part in the community through events like the Fun Run, but Eddy Bear’s participation has also been hugely helpful in our efforts to teach the children that we have to consider our mental and emotional wellbeing in the same way we look after our physical health.’

Nicola Brister, founder and CEO of the charity, said, ‘We would like to say a huge thank you to everyone at Witham Hall, not only for the incredible amount of money raised, but for a really fun afternoon. All the funds raised will be going towards providing play therapy and counselling for children and young people.’